A Plastic Ocean is a documentary film looking in to the problem of plastic, on land, in our food, but mostly at sea.

It is quite a harrowing program, and some of the content is upsetting. However, if ever there was film to shock you in to action on ocean plastic it is this one.

The film takes you around the globe, where we see plastic related deaths of Laysan Albatrosses on Midway (pictured), the plight of children working rubbish dumps in Malaysia, and examine the mechanism by which plastics enter the oceans, and where they end up. 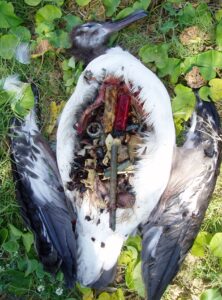 Facts and Figures from the Film: A Plastic Ocean

Presented below in no particular order are some of the facts and figures presented in the film: