There are all types of plastic pollution  found littering our coastline, that need to be removed. The longer they remain, the more they will break down and add to the cloud of microplastic particles that degrade our oceans. There are various compositions of plastic such as HDPE or PP. But for simplicity this page on Plastic Pollution Facts is ordered on the basis of plastic size.

This is the type of ocean plastic pollution we remove. Anything over 5 mm in size.

Virtually every type of plastic humans have ever made, is in the ocean. Plastic bottles, cotton buds sticks, drinks stirrers, coffee cup lids and all manner of single use plastics are a common site.

Alongside these smaller consumer items are a vast number of large industrial origin items, such as crates, pipes, nets, ropes and tanks.

At present we do not remove microplastic pollution  from oceans, there are also nano, and meso plastics which are discussed less often.

Although macro plastic pollution is unsightly, their primary concern is as a source of microplastics. Microplastics are a real problem, we would rank them up with Global Warming, and ocean acidification.

Microplastic pollution and the Phthalates it contains, have similar ecological impacts to DDT and PCBs, in terms of their ability to bioaccumulate. DDT was a bad chapter in history, PCBs we are still seeing the effects of.

Microplastics get everywhere. They mess with sea creatures of all sizes, and if you eat fish or seafood. . . . they will affect you too, the concept of Trash to Table is as unpleasant as it sounds.

Nearly all fish & seafood contains microplastics. A tin of sardines can be as much as 0.03% plastic. If you are a marine predator who lives on fish, this is bad news.

Could You Remove Microplastics from Ocean?

There has been some success removing microplastic pollution from water samples. And various people have given significant thought to it. However, most agree that we will not be able to remove 100%.

One of the major sources of secondary microplastics is beach bound plastic, being broken down by UV rays, and abrasion.

Although some plastic enters the sea directly, much enters via rivers. It’s not all lazy members of the public though. For example: In the UK sewer companies regularly discharge large quantities of plastic, using storm bypass loop holes, leading to wet wipe islands. Yuck. This is labelled as an emergency measure, but some sewage treatment works operate their strom bypass as often as 200 days in a given year.

We have attempted to gauge the overall sources of ocean plastics, it is not really possible. But we’ll have a go anyway. . . . .

It is easy to see the above visible ocean plastic. It is a fishing net. 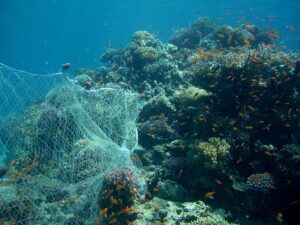 But this one. . . the fcat is not so easy. Fishing net. . maybe. Or teddy bear stuffing, or fibre from jumper. . .the source is more difficult to tell. 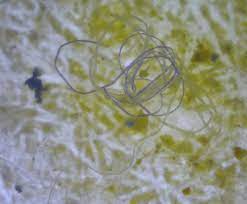 The BBC suggest that:

“Media headlines have focussed on the great aggregations of debris that float in gyres or wash up with the tides on coastlines. But this visible trash is thought to represent just 1% of the marine plastic budget. The exact whereabouts of the other 99% is unknown.” 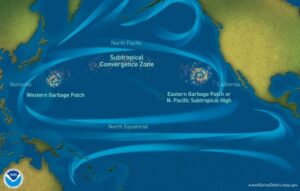 Considering the fact primary microplastics, 35% are synthetic textile fibres, and 28% are vehicle tire particles. So these two together make up around 14% of plastic in the oceans in total.

Secondary microplastic pollution makes up around 77% of all microplastics in our oceans. There composition is more difficult to gauge, but as they are broken down from a representative range of plastic products that we humans use, we can make some assumptions.

The  donut chart actually represents polymers by demand in industry. But it is safe to assume that this will broadly reflect the nature of ocean plastics. 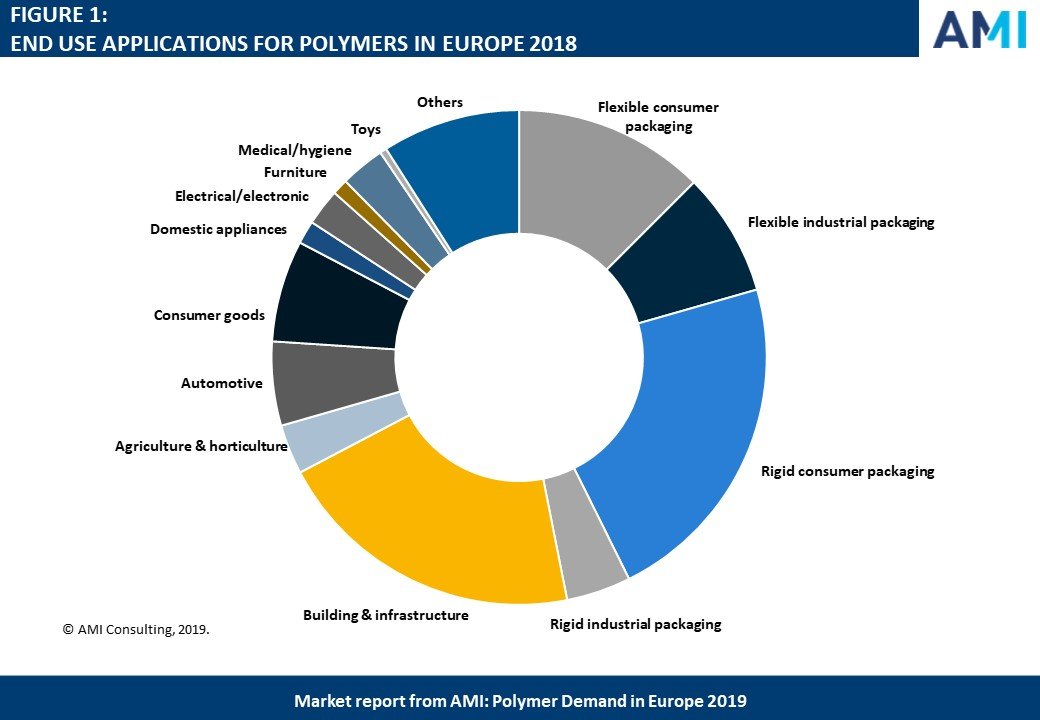 The main problems is that we need to try and guess what sources these translate in to, whilst accounting for primary microplastics that we have already counted.

The facts shown in bar chart shows plastic use by sector. There will be a similar representation in the oceans. Although you might expect some industry sectors to be less well represented. 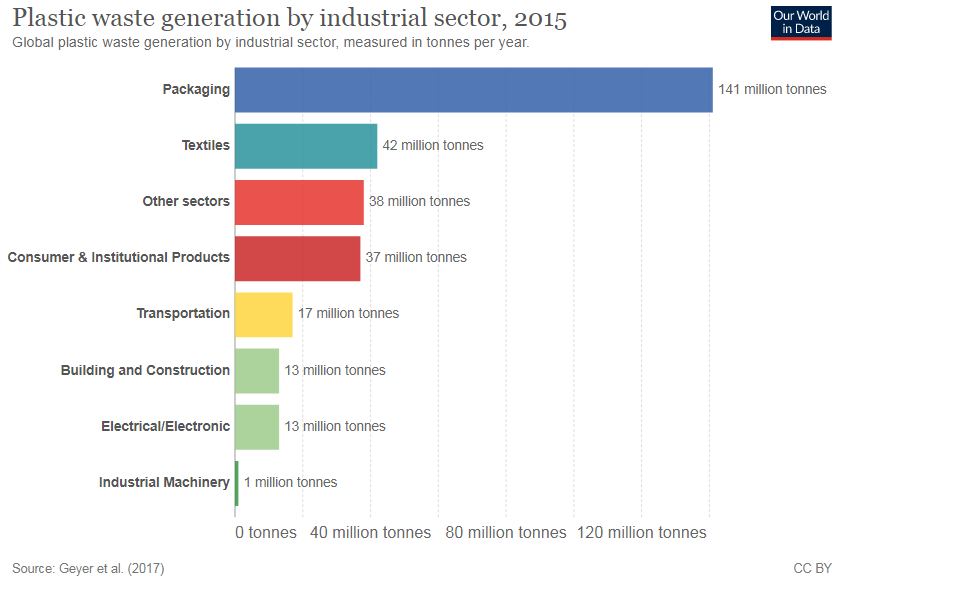 On of the major problems is that not all plastics float, and as such when we clean up a beach or catch plastic in booms & nets, we only see the less dense variants. So although inaccurate when viewed against “found” ocean plastics, the blue donut chart likely represents “actual” ocean plastic inputs.

The by sector donut chart is not however, very fine grained, nor clear. Where is the fishing industry represented for example: But as far as we can see it is the best route for estimation. 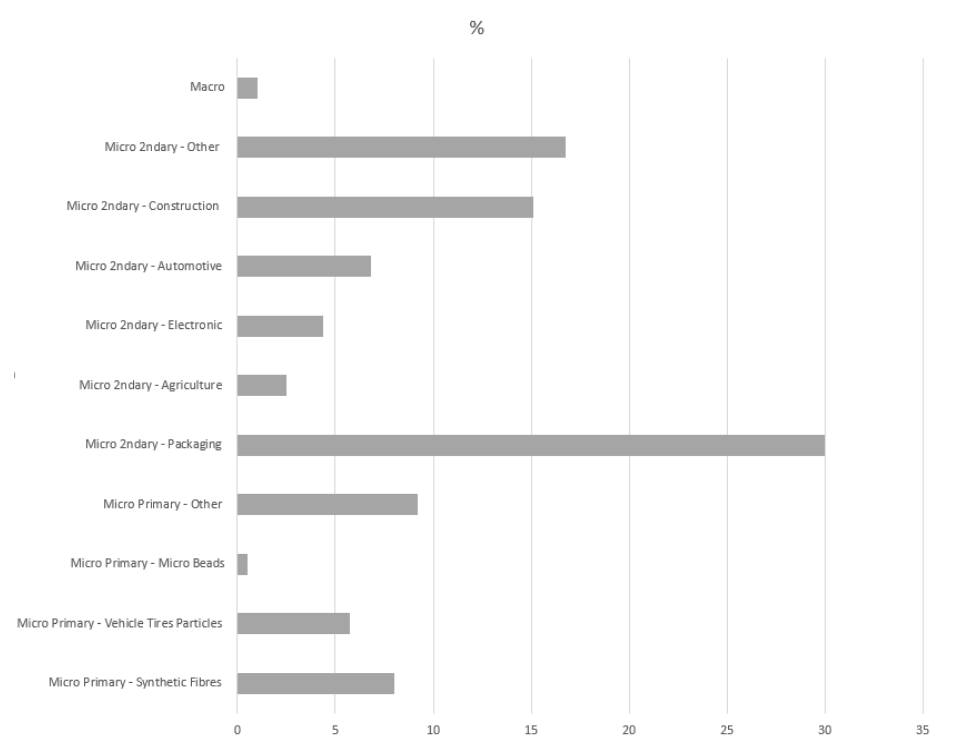 So despite the inaccuracies we now have a vague idea of what the main sources of ocean plastic are. Top offenders, that we can single out are:

The below pie chart shows data review from alternate source:

The fact is visible (big) plastic pollution makes up just 1% of plastics in the ocean today. That makes beach cleaning sound unimportant.

But no! Todays beach & coastline plastics are tomorrow’s microplastics, they are in urgent need of removal, to prevent yet more hard to remove microplastics accumulating in our oceans. 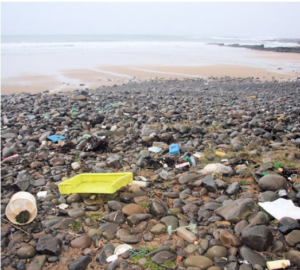 In the analysis of the above data we can see the 77% approx of all ocean plastics are secondary microplastics, and studies show that the beaches are the primary engines of plastic break down. So we need to grab it now whilst it is still there. Help us please.

Thank you for reading this page on Plastic Pollution Facts. Further in depth reading below.

Unpleasant chemicals in plastics that kill Animals and Humans. < Click

How Ocean Plastics end up in your stomach.

Why recycling in the UK needs a lot of improvement.